We had an 8:30 a.m. train from Penn Station in New York to the Amtrak Back Bay train station in Boston. The trip was about 3 hours and went smoothly. All of the trains we been on, so far, have had wifi internet connection. It's made the transit from one city the other very easy and time passes quickly.

Once we departed from the train station, we easily found our lodgings. It's about a 10 minute walk and turns out to be an excellent "hostel". Once we were settled, we decided to go back to the train station and take the "T" (the Boston metro system to the Haymarket area -- also the home of Faneuil Hall. The original hall was built in 1740 and has existed there, in one form or another, ever since. Surrounding Faneuil Hall is the Quincy Market, a long narrow building chucked full of food vendors of every description. We had a great lunch there, and especially enjoyed the "clam chowda"!! One neat and interesting attraction was a group of "break dancers" outside the hall. We enjoyed the show. 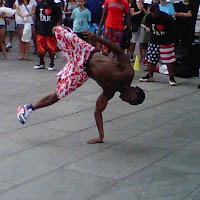 After about an hour of exploring, we walked into the downtown area and found the "South Meeting Hall" in Washington Street. South hall is the site of 1773 mass protest meetings that led to the Boston Tea Party, Old South Meeting House has served as a gathering place for discussion and celebration and a haven for free speech. It's a beautiful building right in the middle of downtown and is beautifully preserved.We continued exploring the downtown. Of course, you would expect lots of shopping and eateries. But some of the streets were completely shut off for pedestrians. Table and chairs were in place and numerous food carts were on the street serving coffee, ice cream and other treats for the warm summer day. We had a delightful opportunity to sit along the promenade and enjoy the people and activity.


We asked around a bit, and after looking at a map of the city, we found the beginning of the Freedom Trail. The Freedom Trail is a walking tour in downtown Boston . It begins with the establishment of Boston in 1630. The story of Boston is told while experiencing architecture spanning more than 3 centuries. The story begins with the Puritan settlement, continues through the American Revolution and the growth of commercial Boston, to present day. We'll walk the entire Freedom Trail tomorrow.  It's a 2.5 mile path in and out of the city marked with a "red line" or "red brick" in the sidewalk, so one cannot get lost.
Posted by Dennis Steele at 8:12 PM No comments: