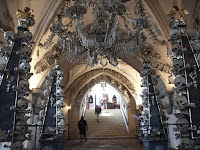 nd I've arranged for a late sleeper-train to Budapest. Since I had some time, I thought a day trip would be in order. A stop by the tourist information center led to me an interesting city called Kutna Hora (pronounced cut-nah hore-a). The city is about an hour away from Prague by train, so it was easy to get there. Once I disembarked I was interested in finding the "center of attraction", the Ossuary and Church of Kutna Hora. An ossuary is a facility for the storage of human bones.
According to accounts I read in the brochures I received while visi

ting there, an Abbot was sent to the Holy Land by the king 1278. Upon his return he sprinkled the cemetary near the church with some of earth he had removed from Golgotha. Golgotha was the site where Jesus was said to have been buried by the Romans. The cemetery soon became a desirable burial site throughout Central Europe. During the Black Death in the mid 14th century, and after some wars in the early 15th century, thousands of people were buried there.
Around 1400 a Gothic church was built in the center of the cemetery with a lower chapel to be used as an ossuary. After 1511 the task of exhuming skeletons and stacking their bones in the chapel was given to a monk of the order. So, in 1870, a wood carver by the name of Frantisek Rint was hired to put the bones in order. He used the thousands of bones to adorn the church, made a central chandelier and built huge bell-shaped mounds of human bones! So, to make this long story short, I went to see the city and Ossuary.
OK, so I've seen some interesting and different sights in Europe. But, I must admit this one caught me right between the eyes. It's difficult to see so many human bones displayed in such a casual manner. I do see how "just another church-like building" has now been transformed into a tourist attraction. There were lots of people there. In such a small town, it must be a boon to their economy! It wasn't expensive to get into the church, but around the church were cute little bistros, curio shops and a tourist van or two. All of these added to the town's prosperity, I'm sure.

So, ciao for now. My next report will be from Budapest, Hungary! Wow, whata ride.

Posted by Dennis Steele at 9:39 AM No comments: