Today is going to be a "house-keeping" day in Jerusalem. At 9:30, we need to contact the delivery van so we can collect Linda's luggage. Let me note that "Delta Airlines" has contracted with a delivery service that "refuses" to bring our luggage to our address. They say it's because we're inside the Jaffe Gate in the Old City. Yet, the street in front of us has a never-ending parade of cars, taxis, delivery vans and buses coming and going all day. But, we're being asked to meet the van at a parking garage -- about 15 minutes away. The luggage will be delivered within a 2 hour window. So, standing on a street corner for 2 hours is "very appealing".

So, I'm thinking Delta Airlines deserves recognition for their "Customer Service" -- and I think they need to hear from us when we get home!!

Each morning we walk a short distance to the Christ-Church Guest House for a delightful buffet breakfast. The cost is 40 shekels, about $11.50, and offers a wide variety of vegetables, breads, fruits and drinks.

I'll post to the blog a couple of times as our day unfolds....

Meanwhile, we've taken the day off to tend to a variety of "chores". We've taken our soiled clothes to a local laundry for a wash n' dry. We'll do a bit of shopping and ask about an English language movie here in the New City. Right now we're sitting in the lobby of the hostel enjoying a fascinating discussion of religious philosophy. One of the guests, here, is a theology teacher at Marquette University. Now if "Bill Maher" was here, it would be a more lively discussion!!


4:30 p.m. -- Luggage in hand, all is well. Now, on to important things like gathering and then folding our laundry.

But as I sit here reporting these comments, I can hear church bells from the Christian Quarter across the Old City and ringing in the distance. A little while ago, the Muslim call to prayer rang out as well. It's Ramadan and, at sunrise or sunset, one can hear fireworks celebrating the holiday. As we wander inside the Old City, we experience the fact that Muslims, Christians and Jews live in close proximity in apparent peace and prosperity.

The narrow streets of the Old City are like a "time machine" -- peeling back much of the 21st Century. Vendors selling their wears. Old men and women balancing heavy loads on their heads. Then we'll see someone talking on a cell phone or sending a "text message"! It's a wonderful and fascinating dichotomy of today's reality.

7 p.m. ---  We've discovered a great coffee bar and cafe in the Mamila Mall just a few steps from the old Jaffe Gate. The three of us had an ample dinner of salad, bread and beer for under $30! Quite a treat considering the venue and quality of the food. After, as we returned to our lodgings, I enjoyed a Turkish coffee from a street vendor just outside the Gate. The coffee was made in the "old way" -- boiling the grounds over an open fire in a silver pot and then poured through a strainer into a cup. It was strong and delicious. It put a perfect cap on the end of another enjoyable day in Jerusalem.

Tomorrow our plan is to visit Yad Vashem, the Righteous Among the Nations Garden and National Cemetery. We're also planning day trips to Masada and the Dead Sea as well as Bethlehem.

We started out the day a bit later than usual -- about 8:30 a.m., so I guess we're getting used to the new time zone. Add to that that "miles of walking" and bed-time doesn't come early enough! Our goal was to make our way to the Jewish Quarter and the Western (or Wailing) Wall. But, fate intervened a bit.

We received an email from Delta Airlines telling us that their delivery company had "tried" to deliver Linda's luggage. There was a telephone number to call, so we tried to find a phone that would serve that purpose. Within 100 yards of our lodgings, there are three public phones -- none of which work. There's a phone in the lobby of our hostel which doesn't work. We have a "travel phone", purchased expressly for this purpose which doesn't work. We were able to buy a telephone card for 30 shekels, but since we can't seem to find a phone that works -- it's a bit useless!

Finally, the tourist bureau allowed us to use a phone. We called and were told that the luggage can be delivered to "Jaffe Gate" -- but not the reception of the hostel. So -- the saga continues!!  One observation I can make is that no-one seems very motivated to lend a hand. When we explain our dilemma, they'll shrug their shoulders, rock their heads from side to side and say "what can I do?" It seems to be a Israeli custom. I'm sure if we were staying in a $500 a night room, we'd have a different experience.

Sooner or later, of course, we'll get the luggage. Maybe??!! 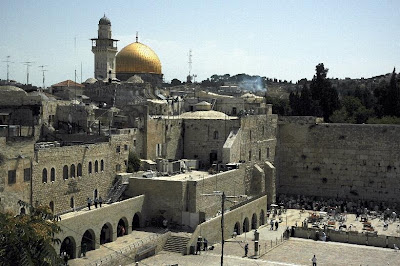 But, enough of this complaining!!

We ventured back to our little restaurant off the beaten path and had a nice breakfast. After studying the map, we set off to the Jewish Quarter and the Western Wall. The Jewish Quarter, present in one form or the other since 134 C.E. now houses about 2000 residents and is home to a variety of "yeshivas" and synagogues. As one enters the Jewish Quarter, the environment changes dramatically. It seems lighter and more orderly. One doesn't see any trash in the narrow streets and it is considerably more quiet than the Christian or Arab Quarters we've experience so far.

As we progressed into the Jewish Quarter, we found a variety of shops and bistros. We decided to have a bit of lunch after seeing the Western Wall, so we kept following the narrow street around until some signage directed us in the right direction. I had visited the Wall in 2007. I was surprised to see the extensive security apparatus surrounding the area. The first time I was here, one just "walked up to the wall". Now, everyone must pass through a security checkpoint and have their bags inspected. Additionally everyone passes through a metal detector. Even with these precautions, it doesn't take long before we were in the crowd of people near and around the Western Wall.

I must admit that approaching and touching the Western Wall is an emotional experience. Here, too, the history of the environment boggles the mind and senses. The Wall (Temple) was first constructed in the 19th Century B.C.E. and was then known as "Solomon's Temple". After its destruction in 586 B.C.E. and the Second Temple was dedicated in 516 B.C.E. It would take pages and pages of descriptions to describe the iterations of The Temple through numerous periods of history -- but suffice it to say, the Wall is recognized by the Jews as a holy site. Its continued existence through the ages attest to the tenacious spirit and determination of the Jewish People.

During our visit there, we witness two bar mitzvah celebrations. It was fun to see the kids in their best clothing, carrying Torah while accompanied by their family and friends. One family, from New Jersey, had made their way to Israel and the Western Wall for the express purpose of their sons bar mitzvah.

It was getting late enough for us, so we made our way back to the Jaffe Gate area. First, we enjoyed a nice refreshing lunch in the Jewish Quarter. Tonight, we understand, there's a light show nearby, so we may be taking advantage of that activity.


Posted by Dennis Steele at 5:28 AM No comments: