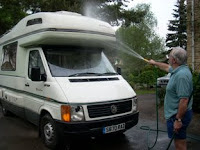 Last night, Helen went off to hear her father sing in a choir. I was invited, but begged off to get some rest. Around 10 p.m. Helen returned and announced that dad 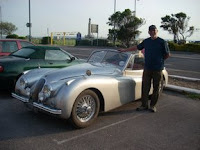 and her step-"mum" we coming over for a visit after the concert. They arrived a bit later and were absolutely delightful as we met and discussed a wide variety of interestings topics. I was able to get a well deserved nights sleep and awoke at 10 a.m. to find Roger loading the RV for our trip to France. Everyone was invited to Helen's "mum" and step-dad for a spot of coffee and biscuits during the morning. Roger and I arrived around 11:30 and met her folks. They live in an absolutely delightful little village, up a narrow windy dead-end road in the most beautiful spot I've ever seen. It was warm in the sun, coffee and biscuits were served and we had a wonderful time. Helen, her mom and son Nickolas performed a couple of tunes (did I mentioned all these folks are singers? And her step-dad is a pianist?).
Roger and I left at around 2 p.m. and headed for Stonehenge, about an hour away from his house. As Stonehenge came into view, it was breathtakin 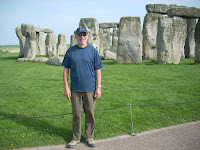 g. We parked the car and walked the short distance to the visitor's center and then to Stonehenge itself. While we were'nt allowed to get too close, we were able to get with 20 feet or so. I was reminded by a brochure that the stones were laid there over 5000 years ago! We took some photos, Roger and I sat a chatted a bit and people-watched. I was gratified to see hundreds of people, young and old alike, coming to visit this unique site.
We then drove the rest of the way to Southampton along the southern coast of the UK and had some dinner. At around 9 p.m. we went to the ferry landing and after aro 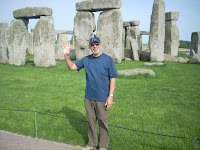 und an hour wait, during which Roger and I continued to enjoy our on-going discussion of this and that, we were allowed onto the boat.
So -- there you are. It is 10:30 p.m. on Saturday night, we are on the ferry and will leave around 11 for the French coast and I've found a cyper-cafe onboard to check emails and continue my travel blog. Ain't technology great!? Well, tomorrow we'll embark onto the coast of France and head down through the WW2 battle grounds and cities along the way.
Do you like my new Jaguar that I'm standing by?? Cool car, oui??
As always ---- stay tuned...
Posted by Dennis Steele at 2:25 PM No comments: