Monday, June 2. Today I decided to "get outa town". I asked the helpful clerk at tourist information what a good day trip wo 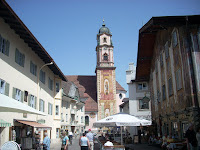 uld be for me. I thought that Innsbruck would be a good bet, and he told me that along the way there is a beauitful Bavarian town called Mittenwald. So, with Eurail pass in hand, I checked the departure schedule and boarded a train at 9:32 this morning. I chose a first class seat and settled in with some Sudoku. As luck would have it, Axel Lehmann joined me in the compartment. He was going from Munich to some other cities along the way for business and, as it turns out, spoke perfect English. We had a nice discussion about sky diving, and Axel gave me some pointers about this part of the country. The trip to Mittenwald took around 2 hours, and I arrived 10:30 or so.

is everything I was told it was. A charming Bavarian town with beautiful artwork painted onto the sides of 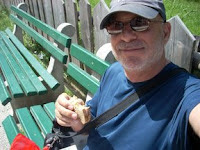 its buildings. The church is dated 1741, so it's been around a few years. As I strolled along the Obermarkt I noticed a market and stopped in to see what was inside. A few minutes later, I had the ingredients for a picnic lunch. I found a park nearby with a delightful fountain in the center. The green grass, shady trees and people sitting and strolling made for a perfect place for lunch. 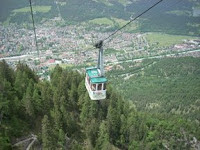 andered off the main street into the neighborhood a bit. Colorful homes lined the streets. The lawns were perfectly sculptured and the mountains were close and in the background. Although it is easily 75 or 80 degrees on the floor of the valley , and a bit humid, the mountains are snow covered and tower over the city. I'm told the peaks of the mountains are 2,244 meters high (close to 7,000 feet or so). I also found that a cable car will go to the top of the mountain for a spectacular look at the city and surrounding area. So, I made my waz to the Karwendelbahn and paid for a round trip ticket. It need 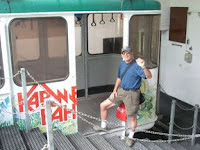 not be said that the views from 2244 meters were breathtaking. It was considerably cooler as well, a welcome break from the heat and humidity.

To round out the day, I returned to the station and boarded a train for Innsbruck. The trip took around 1 1\2 hours, so I relaxed and reflected on the day. You will recall that Innsbruck hosted the Olympic Games in 1976. It is a picture-book city, surrounded by majestic mounta 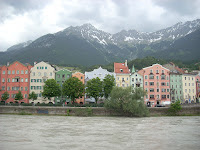 ins with snowcaps and icefloes. I decided to spend about 2 hours here, so I found the tourist information center, got a map and started wandering around the city. The city is completely charming, with the Tyrol Trams carrying passengers up and down the streets. The Rudolfsbrunnen is a magnificient fountain and statue build in 1877 to commemorate the Tyrol's 500 years as a part of the Austrian federation.
An interesting part of the "old city" is the Golden Dachl, a house witha golden roof. The house where the roof is situated was built in 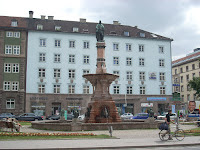 around 1420 by Archduke Fredrick IV. By the end of the 15th century the house was in the hands of the Emperor Maximilian I. In 1500 he ordered that the balcony, complete with golden roof, be built in honor of his second marriage. This area is surrounded by restaurants, curio shops and more. Hundreds of people were in and around the attraction. There is a museum here as well, although I didn't go inside.
All in all, my day trip away from the big cities was a worthwhile distraction. Although, I must say that Innsbruck must be considered a bigger city. Yet, the time I spend in Mittenwald was very pleasant, and I'm glad I took the time to get into the countryside for a slower paced look at Germany and part of Austria.

Tomorrow I'm off to Prague.